Energy sufficiency : towards a more sustainable and fair society

Sufficiency is one of the three main pillars of the approach promoted by the French négaWatt Association since its establishment in 2001. It is an essential part of the energy transition scenario developed by this think tank.

Overconsumption, growing environmental damages, climate change, depletion threats… As regards energy, the current situation is devastating. Can’t we do differently, while still living comfortably ? Many solutions exist to consume less and better. In urban areas, do we really need a one ton car to move a single person on short distances ? Will we ever need larger and larger TV screens ? How reasonable is it to consider normal to wear T-shirts all year long irrespective of the season ? There is so much potential to reconsider the way we use and waste energy all around us ! Going for “negaWatts” means avoiding bad habits and favouring a more sober approach to energy consumption. It is about making the most of our precious energy resources instead of consuming always more as if there was no tomorrow. There is so much to win ! Lighter energy bills, a healthier environment, less dependency on energy imports, more jobs.

The concept of energy sufficiency is now enshrined in the first Article of the country’s 2015 Energy Transition Bill. It is being progressively acknowledged and taken into consideration by stakeholders. However, it is also often misunderstood, and negative preconceptions hamper its acceptance and implementation.

The négaWatt Association is not the only one to promote the sufficiency concept. In France and abroad, other organisations (institutions, businesses, NGOs, etc.) contribute to its popularisation. The word now exists in several languages, such as ‘Energie Suffizienz’ in German. Approaches similar to négaWatt have been developed, and more and more academic publications can be found on the matter. The launch in 2018 of an international expert network on sufficiency (ENOUGH), and the website www.energysufficiency.org are two illustrations of the increasing interest for the topic.

Resources on energy sufficiency are available in English : 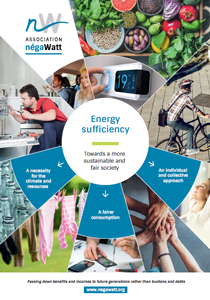